FROM OUTRAGE TO ACTION 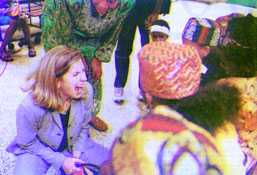 From Outrage To Action

Schaechter, 36, was outraged by the number of young people whose lives were cut short or changed forever --forced to breathe with respirators, hooked up to catheters, unable to move --because of gun violence. Her patients included Tiaquandra Addison, who was 13 when she was struck by a stray bullet in Overtown in 1999 and left a paraplegic.

Schaechter knew that other communities had succeeded in reducing violence and injuries involving children. In Harlem, where youngsters were falling from tenement windows, a pediatrician launched the educational Children Can't Fly campaign and helped pass a law requiring landlords to install window guards. The number of falls plummeted 96 percent.

Using that same approach --bridging public health and public policy --Schaechter developed Not One More, based on the proposition that "not one more" child would die from gunfire.

Not One More did not advocate banning guns. Instead, it focused on prevention with a special emphasis on guns in the house, because most guns used to kill youths come from their own homes. The group helped distribute thousands of free trigger locks in Miami-Dade and Co-sponsored two gun buyback events in 2000 that took in more than 500 guns.

After Miami-Dade community leaders asked Schaechter for more hard research to guide their efforts, Schaechter instituted a computerized tracking system to tally countywide data on firearm killings. This year, the tracking system will expand to include nonfatal firearm injuries. Eventually Schaechter hopes to expand the database to include all violent injuries, including stabbings and beatings.

Since its inception, Not One More has expanded in scope and has evolved into the Partnership for the, Study and Prevention of Violence, a research center based at JMH.

The mission is to prevent all types of violence through a combination of ground-level research, education and community involvement.

Q: What kind of information is the Partnership for the Study and Prevention of Violence capturing in its surveillance of firearm deaths?

A: For any person of any age who is killed by a gun in Miami-Dade County, we track location of the incident, date, specifics about demographics, ethnicity, race. We follow why this happened. Was it an argument between intimate partners, was it a homicide/suicide?

We also find out who owned the gun, where it was stored, how it was stored. We found that somewhat over half of the gun deaths by suicide and unintentional shooting in kids under 18 happened with a parent's gun or another guardian's. That for kids under 10 the vast majority of those deaths are intimate-partner/violence related --in other words, the mom's partner comes back and to hurt her, kills the kid and her.

Q: Is this data telling you about gun-violence trends you didn't already know about?

A: What's interesting about it is it bucks the common perception that the kids who are killed by guns are all bad kids, that it's all gang- and drug-related. Because the majority of our kid gun deaths are in the home --not meant to happen, and wouldn't happen if the gun wasn't there. If we actua11y have hard data to show people that that's the case and to inform their opinions a little more, that's pretty exciting to me.

Q:- Miami-Dade's gun deaths have been dropping in recent years, in keeping with the downward trend for all violent crime. Earlier this year, however, we had a spate of kids killing kids. [In January, police accused an ll-year-old boy of fatally shooting his 10-year-old friend with his father's rifle. Three teenagers were accused of trying to hire a hitman to shoot and kill two rivals. In February, three teens were charged with shooting a 20-year-old during a botched drug deal.]

A: [The decrease] is an opportunity to take stock and try to address things in a more deliberate fashion. Not to be too much of an alarmist, but quite frankly, I think we might not have so many years to do that kind of thing. It might be we're getting ourselves in position to get ready for: numbers that are going to go up again. [Schaechter said her concern is based, in part, on the uncertainty of the economy and the fact that unemployment in the "highest-risk neighborhoods" remains a pressing problem. She also cited cuts in government funding for drug rehabilitation, juvenile justice and alternative programs, as well as a new study ranking Florida near the bottom tier of states in most measures of educational performance.]

Q: Talk about Not One More's gun buyback and gun-lock event.

A: We did an interesting study that looked at the participants who came to Gun Safety Day [in 2000] to exchange their guns for gift certificates and those who went to get a free gun lock. People who came to get a gun lock tended to be almost exclusively male, and those who were exchanging guns were about 45 percent female.

The ones getting a gun lock really felt they needed their gun for protection. Those who were returning their gun really didn't feel they needed it anymore, as opposed to primarily being motivated by safety or the gun no longer working or the $50 gift certificate for Winn-Dixie or Burdines.

About two-thirds of both groups had kids at home either living with them or visiting. So both efforts were useful because they secured a gun or got one out of the home. There were 444 guns collected at this event.

But like 80 percent of the gun exchangers obtained the gun as a gift or by other means, not through buying it in a gun show or gun store. A lot of them didn't want the guns around. So it was interesting to me because it said there are a lot of guns hanging around at homes with people who weren't motivated to get them, probably weren't likely to put a lock on them because they didn't sound like they really wanted to touch their guns, and had kids in their home. Well, gun buybacks often get criticized as not getting the "street" guns, the "criminal" guns, off the streets. I looked at it and said gosh, let's talk about the "house" gun that no one's really watching.

Q: Beyond co11ecting firearm data and giving out gun locks, the partnership also is an umbrella group that brings together various youth and violence-prevention agencies to help each other.

A: Right. Agencies want to collaborate. They can't do everything, and it's better to address these problems in a multifocused way. So that's really the purpose of getting the coalition together. For example, the Girl Scouts needed training on curriculum development [about nonviolence and other pro- social activities] and they also wanted a website. We're developing the website. The Peace Education Foundation has a curriculum they want to disseminate.

We're also training agencies to do their own performance evaluations. There is a consensus that we need to evaluate our programs here in the community so that we aren't doing things that just sound good and maybe don't have good outcomes. The carrot at the end of the stick is we have a grant writer for those that complete the program.

Another project we did was partnering with Weed and Seed in Liberty City, where we gave small grants to residents and community agencies. We funded new helmets for kids on the football teams. We did some fencing around daycares and summer camps, swimming lessons, a talent show. That may seem afar from what we do, but we were supporting pro-social, safe, mentored activities so the kids aren't at further risk for violence.

Q: You're planning a major project to test the importance of community involvement.

A: On our horizon, we're working with Dunbar Elementary School, whose park has been condemned. We'll work with the PTA and the principal and the teachers and hopefully the kids as well, in terms of helping them building a new park. …[In other cities] they found if they do it that way from the inception, the parks are protected, they're utilized, the drug and crime element gets kicked out and stays out.

Then longer range, we'd like to pick out three community parks with similar demographics and look at the actual role of the community involvement from the inception. So it would be one park where the community is involved in the design and the building. One park that we just plop down. And then we'd have another community where we'd just watch.

And we're going to be following injury rates, violence among the kids, use of the park. Our expectation is that the park where the community was involved from the very inception and through the building will do a lot better. And the third site which served as a "no-intervention control" would end up getting a park after the study was over.

For more information on The Partnership for the Study and Prevention of Violence, call 305-585-3928.