View our slideshow of places "Shining a Green Light" during the first National Injury Prevention Day.

Thanks to everyone who helped make this day a success.

Amid the COVID-19 pandemic, children are dealing with another crisis. Injuries are the leading cause of death and disability to U.S. children from 1 to 18 years old. Every day, 20 children die from preventable injuries, resulting in more deaths than all other diseases combined.

On Wednesday, November 18, 2020, the Injury Free Coalition for Kids will launch the inaugural "National Injury Prevention Day" to raise awareness about the significance of injury and advocate for prevention. Doctors, nurses, and community outreach personnel at close to 40 Level I Trauma Centers around the country will join forces that day, each in their own way addressing the injuries most prevalent in their communities.

The Injury Free Coalition for Kids® is among the country's most effective injury prevention programs. It is comprised of over 40 sites located in Level I Trauma Centers of 30 states across the country in all the country's Federal Trauma Regions. These sites, including yours, have hospital-based, community-oriented injury prevention programs whose efforts are anchored in research, education, and advocacy. Each site has independent, physician-led programs driven by the Coalition's mission: preventing injury to children. While research determines where the injuries take place and which ones are most prevalent and severe, most of the injuries addressed occur in urban environments. Coalition members work to empower the diverse populations who live there, and they address the injuries most prevalent in their areas. 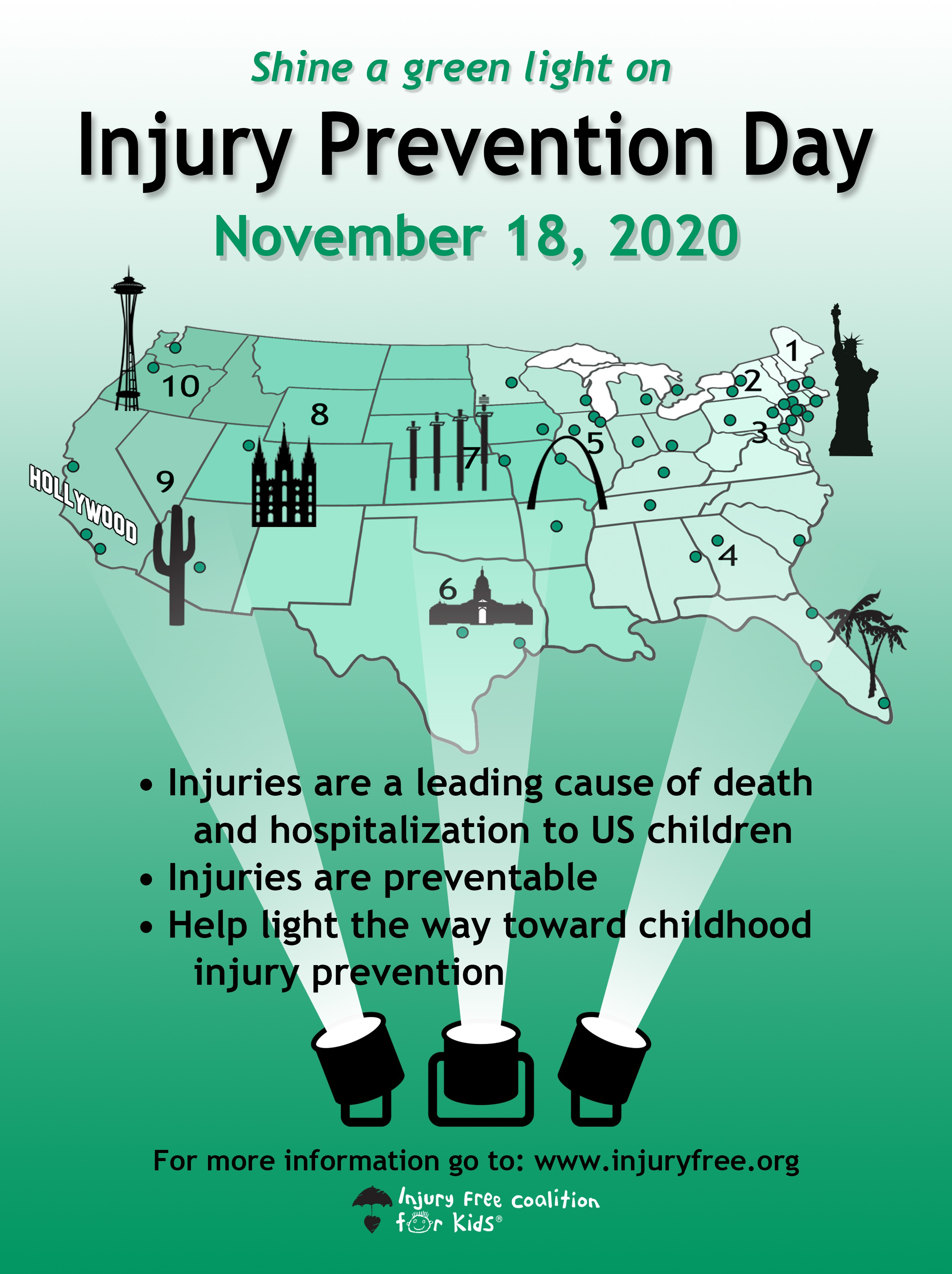 How are Injury Free sites and others participating? 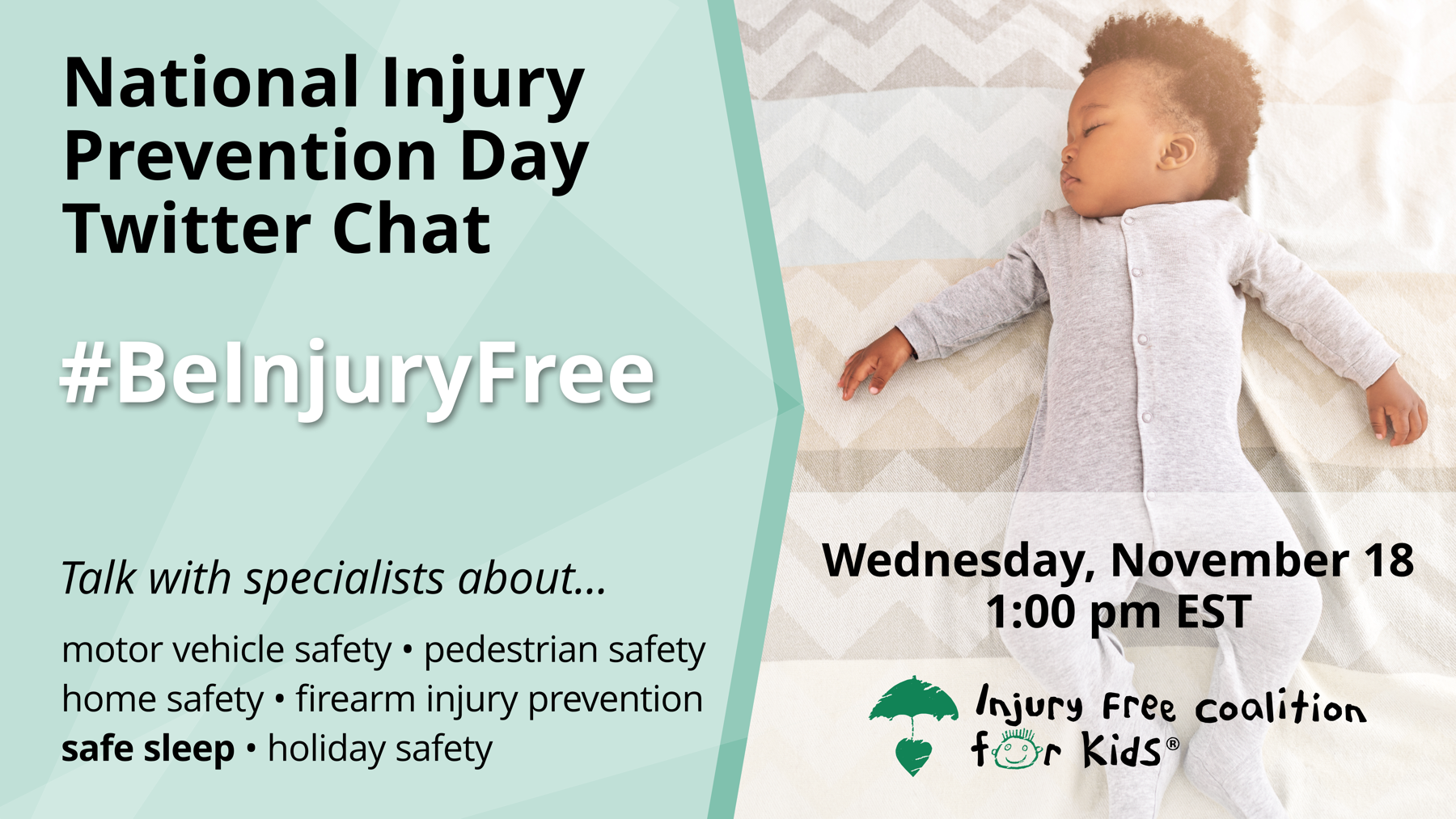 The Injury Free Coalition for Kids will host a live one hour twitter chat on November 18th at 1:00 pm EST with Injury Free sites and their institutions to help inform people about the urgent need to prevent injuries and how everyone can play a role. To join the conversation use the hashtag #BeInjuryFree.

Topics to be discussed include injuries caused by motor vehicle crashes, poisoning, safe storage of firearms, the need for safe sleep, home safety, holiday safety and other injuries often seen in emergency departments across the country.

On Wednesday, November 18th, 2020, as the sun went down across the nation, city landmarks were shining green. The Johns Hopkins dome in Baltimore, the Hemsley Building on Park Avenue in New York, The Prudential Building in Boston, and bridges in Arkansas and Houston are among the many places that were lighting up in green to raise awareness. Hospitals in at least 15 cities were shining a green light.

Click the name of a city to view photos from that city.

A number of sites are encouraging employees to wear green, and promoting the day with hospital signage indoors and out.

Austin: A news segment aired on the November 17th to promote child safety/injury and National Injury Prevention day. Dell Children's Hospital and Texas Gun Sense and did social media posts leading up to the day, an op-ed has been submitted to the Austin Statesman. An interview was also conducted on KXAN news (link to article).

Columbus: The Center for Injury Research and Policy staff wore green when their photo was captured and shared on National Injury Prevention Day. The event was posted using the @CIRPatNCH Twitter handle, the @nationwidekids Twitter handle, and the @PreventChildInj Twitter handle. Information about the event was also included in the Prevent Child Injury newsletter.

Houston: Texas Children's Hospital published an Op Ed in the Houston Chronicle and on the hospital blog.

Iowa City: National Injury Prevention Day was covered in the Injury Control Research Center's monthly injury blog. The Center also produced a zoom background that was shared across the country.

Injury Free Iowa took over the hospital Instagram on Nov. 18th with a "day in the life" theme showing injury prevention colleagues doing work in safe sleep, child passenger safety, ATV safety and teen driving safety. In addition, the site provided a large amount of the staff in the hospital with a pin they wore that said "I'm wearing green because...." The hope was that those efforts would encourage conversation about pediatric injury prevention.

Injury Free Iowa was also joined by other University of Iowa Departments and entities within their Institutions and they sent out social media posts about Injury Prevention Day. The Department of Transportation in Iowa took part as well by posting Injury Prevention messages on interstate signs.

Philadelphia: Injury Free Philadelphia, at St. Christopher's Hospital for Children, has produced a website and a flier for Injury Prevention Day. Visit InjuryFreePhiladelphia.org and download the flier.

Thank you to all Hospitals, Cities, Educational Institutions, Government Agencies, Organizations and Associations for helping to Shine a Green Light to raise awareness about the need to address and prevent Injuries. Together we are working to make a difference.

Texas Children's Hospital
City of Houston
The State of Texas, I-69 Corridor