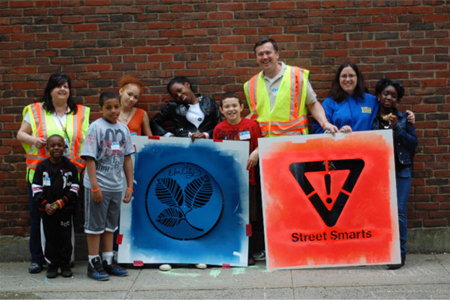 Every 7 minutes, a pedestrian is killed or injured. This reality hit home in New Haven after a Medical student and an 11-year old girl were recently killed by motor vehicles. The STREET SMARTS program was created in 2008 to eliminate pedestrian and bicyclist injuries in Greater New Haven by sensitizing drivers to the fact that pedestrians and bicyclists are legitimate road users and should always be expected on or near the roadway. STREET SMARTS also educates pedestrians and bikers about minimizing risks to their safety, such as wearing properly-fitting helmets and using designated crossing locations. The Public Relation Society of America has awarded the STREETS SMARTS Campaign with three awards including “Best In Show” at the 2009 Mercury Awards.

Back to New Haven
Main Page